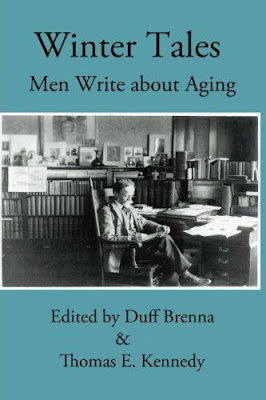 I have an essay (and a couple of poems) in a book collection titled Winter Tales: Men Write about Aging (Serving House Books, 2011), edited by Duff Brenna and Thomas E. Kennedy. The title gives you the basic idea of the subject matter. My essay is called “Paul Tillich Never Took Ativan.” I take as my starting point Tillich’s assertion that “The fear of death determines the element of anxiety in every fear. Anxiety, if not modified by the fear of an object, anxiety in its nakedness, is always the anxiety of ultimate non-being”—in other words, my take on aging here is in reference to its ultimate outcome, but in a specific rather than an abstract way.

Other contributors include Norman Mailer (interviewed shortly before his death), Mario Vargas Llosa, Robert Pinsky, Steve Kowit, Stephen Dunn, Liam Mac Sheóinín, and many more. I like what the editors have assembled, and I think that Serving House is quite the up-and-coming press. A companion volume of women on aging is planned.