New Book of Poems "Takes Us On An Exuberant Journey..." 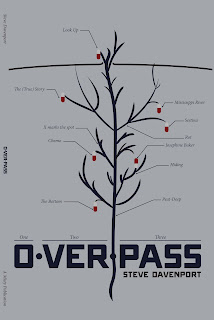 “Steve Davenport has taken the slapdash lexicon of a mortally wounded industrial base and stitched, jammed, jumbled and creased together this searing collaboration of form and function.” —Tyehimba Jess *

As Davenport himself says, “A key thread running through my new book of poems, OVERPASS, is the plight of a character dealing with metastatic breast cancer. Her name’s Overpass Girl. The poem I’m posting here [“Sauget Dead Wagon”] comes late in the book and expresses the frustration and anger that accompanies her battle against a disease that will not let go. It also expresses mine as author whose work has limited effect. A dead wagon, by the way, is a common name given to the vehicle that travels the countryside, picking up carcasses of farm animals, and delivers them to a rendering plant.” [Facebook post dated 5 July 2012]

With its unsettling image of chemo capsules dangling from an herbaceous plant on the front cover, and a table of contents which reads like an enticing list of mainstream magazines, this new book intrigues from the get-go.

As Martha Collins sums it up: “Overpass creates a startling and delightful tension between its richly gritty content and a craft that crashes through its own formal restraints with deft use of wordplay, syntax, allusion, and joyful sound.” *

* Quotations excerpted from back cover of book.

Nine Poems and Three Fictions, chapbook by Davenport published online by The Literary Review, which includes several poems from Overpass


Davenport’s story, “Bomb, Reporting From Inwit,” is from a novel-in-progress.